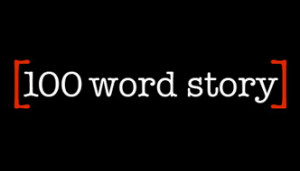 I’ll try to keep this short.

A few years ago, however, a friend of mine, Paul Strohm, wrote a memoir consisting of 100 100-word stories. He modeled the form after a fixed-lens camera, with the idea that an arbitrary limit inspired compositional creativity. I tried my hand at writing such tiny stories because I like to experiment, but I quickly became exasperated by my early attempts. I couldn’t come anywhere close to the 100-word mark. At best, I could chisel a story down to 150 words, but I was frustrated by the gobs of material I left out.

And so the challenge began. As one accustomed to writing long, I wanted to learn what it meant to write short. That turned into a love affair with the short form known as flash fiction. I started 100 Word Story with fellow writer and friend Lynn Mundell.

I liked the way short shorts communicate via caesuras and crevices. The form speaks to the singularity of stray moments by calling attention to the spectral blank spaces around them; it can perfectly capture the disconnections that existentially define us, whether it’s the gulf between a loved one, the natural world or God.

Ghosts are good for writing, I’ve learned, so I’ve invited them in. Our lives are as much about the unspoken as the spoken.

Here are some essays and interviews—and lesson plans—on flash fiction: