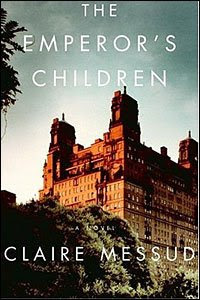 My, what a lot of fanfare this novel received. After I read the reviews, I expected a stunning classic. A daring style. Wisdom. Maybe more.

The Emperor’s Children didn’t meet my expectations, which isn’t to say that it isn’t a good read (navigating a double negative might sum it up). It’s competent and well constructed—in the way an aristocrat ties his cravat—and surprisingly fun at times. In fact, it’s the kind of book I can feel smart reading, yet it’s no more demanding than watching TV—the perfect book to take on vacation.

Above all, it’s a writer’s novel, chock full of all sorts of descriptions, piquant and promiscuous and sometimes gorgeous, as if writing descriptions were the point of it all. Yes, Claire Messud is an active, perhaps hyperactive, describer. The narrative moves at times as if each dust mote in the air might just cry out for an adjective or two of investigation.

In fact, Emperor’s made me wonder if description is the new narrative these days, the new beginning, middle, and end. It seems to have usurped characterization, bulldozed metaphor off to the side of the road, slapped dialogue into a whimper. I read so many reviewers gush over authors who write sentences that spill over with description.

Every one of Messud’s sentences lets us know that a writer has written it, as if she’s in a writerly competition, obsessively injecting adverbs and adjectives and the odd odd word in a sentence. I came to peculiarly enjoy the way she might construct a scene—say a restaurant scene—and end up describing the salt and pepper shakers, the ice cubes in the water glass, the crinkles of the white table cloth, the part of the waiter’s hair, the fabric of the carpet, the smell of the wine, the shape of the potatoes in the soup….and then touch base with the characters and their drama. She catalogues the world, and she does it gorgeously, masterfully, even enviably, but somehow she misses the telling detail, neglecting the guts of her story in service of the wordy words in her head.

The critic James Wood wrote that “Nabokov and Updike at times freeze detail into a cult of itself.” Messud is likewise cultish with detail (interestingly, she’s married to James Wood.)

The Times calls Messud an “unnerving talent” in its review of the novel, “a crafter of artful books praised more for their ‘literary intelligence’ and ‘near-miraculous perfection’ than for their sweeping social relevance” until The Emperor’s Children, which is “a comedy of manners — an astute and poignant evocation of hobnobbing glitterati in the months before and immediately following Sept. 11.”

The novel is a comedy of manners, promising hefty themes in the milieu of New York intellectuals and sophisticates, but each character is somewhat hackneyed, a cardboard cutout, the construct of an author adept at writing and researching the backgrounds of her characters, but unable to put the necessary flesh on the bones.

Marina is the typical spoiled rich girl—smart but flip and undisciplined, searching for meaning and a purposeful life, if not a husband, as she approaches 30. We’re told that she’s exquisitely beautiful and charming, but we have to take the author’s word for it. She tends to seem simply spoiled and inert on the page.

Julius is the typical gay cultural critic, caustic and callow and capricious and coked-out, exhausted by his decadent escapades and looking to settle down while also fighting the urge to skylark about town just a bit more (and you just know he’s going to be punished for his skylarking ways—the scene of his punishment is one of the most crazy, riveting scenes of the novel).

Danielle is the smart hard-working gal who can’t land a guy. She is a television producer who longs to create stories on weighty topics but instead covers liposuction—career situations like this are the definitions of tragedies in this novel; everyone deserves to be important and famous, it seems, and a story on liposuction doesn’t cut it.

Danielle has an affair with Marina’s dad, Murray, the emperor of all these children, who’s the stereotypical ‘60s activist, a truth teller who lost the truth somewhere in the ‘70s but still attempts to spout it between scotches and lurching leers. He’s writing a book about how to live, although he and we know he’s lost the necessary vision or self-respect to be able to tell that tale.

Ludovic Seely steps in as one of the two characters who aim to shake things up, especially when he begins to court Marina; he’s smarmy and arrogant, supposedly brilliant, and ready to usurp Murray’s regal role with his post-ironic sensibility, but on the novel’s pages he has about as much insight, wit, or intellect as a drunken, self-satisfied bore at a cocktail party. That’s fine except that all of the characters revere him, or at least reckon with him in ways that he doesn’t earn for the reader.

Bootie’s the character who most truly comes to life and challenges and threatens the reader, just as a young, avid thinker does to us all. Bootie might be Messud’s best character, or the only one who can carry a novel by himself; we’re never quite sure what he’s capable of, which makes him dangerous. And he is dangerous. He aims to bring down the Emperor’s house by exposing Murray’s derelict intellect, strangely thinking that he’s performing a service and naively carrying a torch for Marina at the same time.

The novel is oddly a September 11 novel, although I strain to figure why Messud literally dropped this bomb on the novel. Everything was much more interesting before September 11, and the novel didn’t do much with the event. When things were supposed to be serious, the gravity felt forced and unfulfilled; when the characters turned back into their selfish selves, the story felt diverted, neglected, hurried.

Still, despite these misgivings, Messud is a florid, adept writer. Her sentences flow, despite her infatuation with the comma. And she crafts a pretty good story—perhaps short of the “near-miraculous perfection” the Times credits her with, but one that kept me turning the pages.

I talked to several people who read this book, and they all liked it kinda, sorta, but none of them could remember much about it. One friend was able to name nearly all of the characters from a movie he saw in the ‘70s (the “Bad News Bears”), but couldn’t remember one of the character’s names from Emperor’s.

I suppose this is the risk an author takes when description is placed on such a pillar. Many readers forget the words that describe the characters they’re supposed to remember.