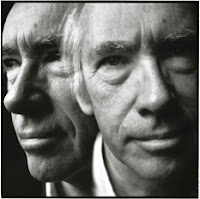 I’ve always thought of Ian McEwan as a sort of modern day Graham Greene. It’s not about their subject matter or their style, but the discipline, the concise and unwasteful approach they take to their narratives.

All of Greene’s novels seem to be more or less the same length, as do McEwan’s. Likewise, Greene and McEwan share an appreciation for a straightforward story, carefully plotted, with a keen sense of suspense.

Suspense. It’s an enviable narrative skill, no matter if you’re writing genre fiction or experimental fiction. McEwan, like Greene, is able to write challenging, thought-provoking novels while keeping you on the edge of your seat—just enough so.

The February 23, 2009 New Yorker published a nice profile of McEwan, focusing largely on his evolution as a novelist of scientific reasoning, but also capturing his thoughts on craft. One of his goals is to “incite a naked hunger in readers,” he said. To create this hunger, he gives a great definition of suspense: “Narrative tension is primarily about withholding information.”

This approach stands in contrast to the more expositional “background” approach to characterization that is so often proselytized. Know your characters’ eye color. Know the way they soap themselves in the shower. Know if they had pets as children, etc., etc.

But this sort of background knowledge can not only bog down the story, but weigh heavily on the writer, killing the notion of suspense.

The profile calls McEwan a “connoisseur of dread.” “At moments of peak intensity, McEwan slows time down—a form of torture that readers enjoy despite themselves.”
McEwan can slow down and create tension in such a way because he’s Nabokovian in his ability to “fondle details.”

McEwan explained, “Writing is a bottom-up process, to borrow a term from the cognitive world. One thing that’s missing from the discussion of literature in the academy is the pleasure principle. Not only the pleasure of the reader but also of the writer. Writing is a self-pleasuring act.”

I envy McEwan for his ability to strike this chord of narrative leisure while attenuating the action to such a degree. “McEwan believes that something stirring should happen in a novel. Though he is animated by ideas, he would never plop two characters on a sofa and have them expound rival philosophies.”

In fact, he keeps a plot book full of scenarios two or three sentences long. “Here’s one,” he said. “’A comedy of beliefs set in a laboratory. Into this realm comes a young Islamic scientist who is technically brilliant. The head of the laboratory is a secular humanist, and the two become entangled. Something short and vicious, like Nathanael West.”

I can’t say that I’d want to read that novel, but then perhaps McEwan could make it interesting.

For more on McEwan, read