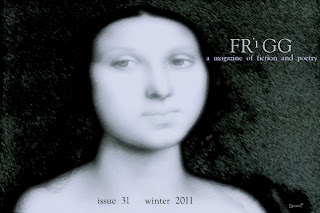 In the second part of my ongoing series to explore and celebrate online lit mags, Ellen Parker, founder and editor of FRiGG magazine, answers a few questions about spirit and soul of FRiGG.

The first thing you’ll notice about FRiGG is its riveting artwork. In fact, I think of it as much an online art journal as it is a literary journal.

Art flows into stories and poems to provide a sumptuous reading experience. I sometimes forget that I’m reading an online journal because my computer screen becomes suddenly textured, painted—and I’m not annoyed by extraneous links or ads or pulls to lit contests or blogs or, or, or other things.

I can read. That’s not an easy thing to accomplish online. And here’s the kicker: FRiGG’s style of presentation is matched by its quality of writing. Each author writes truth with a slant, as Emily Dickinson recommended.

Just in case you were wondering, Friggis the name of the Norse goddess who was married to Odin. She was the patron of marriage, but in some myths she supposedly had affairs with Odin’s brothers. So I guess this means that FRiGG might be full of love and deception. Or just doesn’t live by the rules.

What was the genesis of FRiGG?

I started FRiGG almost eight years ago with Sean Farragher (the poetry editor) and Al Faraone (the guy who does most of the artwork). I met both of them at the Zoetrope Virtual Studio, an online workshop for writers and artists. In fact, I’ve met a large number of writers, editors, artists, and photographers during my years at Zoetrope. The site has been hugely valuable to me as a place to workshop my own fiction writing, read other fiction writers’ work, and get exposure to the work of poets, artists, and photographers not only from all over the U.S. and Canada, but also from around the world.

One of the reasons I started FRiGG was that I saw some incredible work at Zoetrope and I was like, “My god, this work needs to be showcased.” Also, I liked the idea of displaying each poet and fiction writer with a work of original art that was meant not to distract the reader from the stories and poems displayed, or to overshadow the writing, but instead to function as a lure to bring the reader into the writing itself. Kind of like crooking one’s finger and going, “Oooh, cast your eyes this way.”

What kind of writing are you looking for?

I am looking for writing that I like. I like writing that is so honest that it’s startling—and perhaps, at times, so honest that we might want to look away, we might be a bit put off, but we feel that we must be brave enough to keep listening to the writer. I often like writing that is odd—but without being self-consciously “wacky.” This can be a fine line. I like to see all sorts of human relationships addressed, and perhaps looked at from angles that we’re not used to seeing.

Is FRiGG more for established writers, or are you interested in finding new talent?

I have no preference for “established writers” as opposed to “new talent,” and vice versa. I try to respond only to what’s on the page. I don’t care who the writer is, how old he or she is, how “experienced,” how many degrees he or she has amassed, how many contests he or she has won. Just let me look at the story, or let Sean Farragher look at the poem (and the associate editor Dennis Mahagin is very qualified to look at both poetry and literature), and we will respond honestly to what is on the page.

What literary magazines does FRiGG admire the most?

This is perhaps the hardest question for me to answer. I don’t want to name specific magazines. I admire any literary magazine staff that has the interest and the guts and the determination and the persistence to put together a written and visual product that presents fiction, poetry, and nonfiction, and, in some cases, artwork and photography (or any combination thereof) that they believe should be given a platform.

I feel disheartened when I see some magazines try to use the “cult of personality” among fiction writers and poets (such as it is) in an effort to put their magazine above others, to perhaps imply that their content is worthier because it has been contributed by “famous” or “cool” writers.

Sometimes these magazines hold contests for which they charge reading fees that are not insignificant, and they get “famous” writers to be judges, and they urge submitters to put their work before the eyes of these judges, as if just getting your work in the proximity of one of these writers would be reason enough to submit to the contest (although I often wonder whether these judges even see much of the work that’s submitted; I suspect that most of it is waded through and rejected before it makes it to the judge).

What am I trying to say here? I guess I admire the literary magazines that are not “cool.” They might not hold contests. It’s okay if the writers they publish are not “famous.” They just like putting out a literary magazine. They just like putting up stories and poems in the hope that people might read some of the writing and go, I am lying on the floor after I read that.

It will never be “mainstream and popular with a wide audience.” I don’t have any special aspirations for it. Is that terrible to admit? I just want to keep doing it. I love doing FRIGG. I love the writers in FRiGG. I love the stuff these writers say. I love the staff of FRiGG. I’m not saying all that’s in FRiGG and about FRiGG and everything having to do with FRiGG is the greatest shit ever. It’s not. I hate stuff that’s supposed to be the greatest shit ever. You look underneath it, and you go: it’s not.

What do you think the future of the literary magazine is?

I think there will always be a place for the literary magazine as long as we have people who want to read (and to write) writing that is honest, and interesting, and daring, and humane, and beautiful, and ugly, and startling, and mind-altering, and perhaps unclassifiable, and after people read it they go, I just need to lie down for a while.