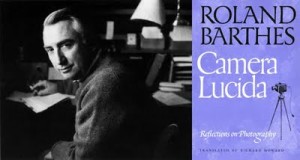 I have a love affair with books on photography. Susan Sontag’s On Photography, Henri Cartier-Bresson’s The Mind’s Eye, and now Roland Barthes’ Camera Lucida.

I suppose I’m drawn to commentary of photography because photographs provide such a moment for existential reflection—such an everlasting moment (a paradoxical phrase that in itself defines photography’s poignancy). Each photograph resides in a prism: the intent of a pose, the person caught unawares, the gaze trapped in time. Each photograph tells the smallest part of a much bigger story.

And then I love Barthes, who writes more like a poet than a philosopher. It seems as if he touches each word with his fingertips. He’s a sensualist, a memoirist, in the best of ways; his thought, as complex as it is in all of its theorizing and decodings, always traipses through life, the drifts of memory.

Barthes wrote Camera Lucida in homage to Jean-Paul Sartre’s L’Imaginaire, in which Sartre discusses what the existence of imagination shows about the nature of human consciousness. His conclusion is that because the imaginary process relies on intentionality, the world is constituted not from the outside into our consciousness, but rather we constitute the world based on our intentions toward it.

The interplay between exterior and interior forms our relationship with photography as well—which “divides the history of the world,” says Barthes. Photography forces us to believe in the past in all of its incongruities. How differently would we view history, after all, not to mention our own lives, without photography?

Consider the photos of oneself over a lifetime. Barthes says we want our photographs to correspond with our “self,” even in our various poses over time, which show a transient notion of self more than a solid core. Each time we pose for a photograph, we assert a self to the future viewer: “I am happy,” or “I am beautiful,” or “I am intelligent” (or “I am a pissed-off teen who doesn’t want to be in this photo,” which marked many of my early photos). A photograph can never correspond to our self, though. Barthes says, “…’myself’ never coincides with my image; for it is the image which is heavy, motionless, stubborn (which is why society sustains it), and ‘myself’ which is light, divided, dispersed.”

The most interesting part of the book is Barthes’ framework for viewing photos through studium and punctum. Studium denotes the cultural, linguistic, and political interpretation of a photograph; punctum denotes the wounding, personally touching detail which establishes a direct relationship with the object or person within a photograph.

“A photograph’s punctum is that accident which pricks me (but also bruises me, is poignant to me),” Barthes posits.

Most photos don’t prick, though. They provoke only polite interest because they are invested with studium. “The studium is that very wide field of unconcerned desire, of various interest, of inconsequential taste: I like / I don’t like.” Think of the photos in advertisements, in hotel lobbies, or the posed family photos that do little to reveal the people in them (so they are themselves advertisements in the end).

“What I can name cannot really prick me,” he says of studium.

It is the ineffable that makes art arresting; its meaning resides in its ability to disturb. The wound provides its own particular, strange salve. When I survey the books I love, the photos and paintings I return to again and again, they all stare at me from an abyss I can’t quite fathom. They tell, and they don’t tell. They’re beguiling, elusive, yet demanding.

Despite being a prick, punctum isn’t about shock value, though. “Ultimately, photography is subversive not when it frightens, repels, or even stigmatizes, but when it is pensive, when it thinks.”

Thinking, shaping, as opposed to recording, as people often think of photography. Photography has always struggled for a place in the arts because it can seem as simple as pushing a button to open and close the shutter. But as anyone who has ever tried to take a compelling portrait knows, it’s more than a quick snap. “The great portrait photographers are the great mythologists,” Barthes says.

Written after his mother’s death, Camera Lucida is as much a reflection on death as it is on photography. Death and photography co-mingle in a way no other art does. “The Photograph does not call up the past (nothing Proustian in a photograph),” writes Barthes. “The effect it produces upon me is not to restore what has been abolished (by time, by distance) but to attest that what I see has indeed existed.”

Therein lies its haunting, disturbing quality: photography attests to our mortality. “The photograph possesses an evidential force, and that its testimony bears not on the object, but on time. From a phenomenological viewpoint, in the Photograph, the power of authentication exceeds the power of representation.”

Whereas film presents the flow of continuous time—the absence of the past, in effect—a photograph breaks our notions of continuity. So the punctum “is Time, the lacerating emphasis of the noeme (“that-has-been”), its pure representation.”

The photos that reveal such a punctum of time for me are the photos that cause me to pause in my stream of Facebook photos. Friends sometimes post photos of their dead parents, parents I grew up with, and I look at them at once like the little boy who stood beside them, yet also like the adult who knows the circumstances of their aging and death. It’s an incongruity I can’t quite reconcile, an incongruity that always wounds. Photography allows us to look into a dead person’s eyes while they’re alive (or vice versa).

As Sontag says in On Photography, “Photography is the inventory of mortality. …Photographs state the innocence, the vulnerability of lives heading toward their own destruction, and this link between photography and death haunts all photographs of people.”

Barthes searches through photos of his mother for what he calls “the air”: “that exorbitant thing which induces from body to soul—animula, little individual soul, good in one person, bad in another.” He finds photos that only give him her crudest identity, her “legal status,” until he finds one that he calls the “Winter Garden Photograph,” in which he cries, “There she is!” It’s a likeness he compares to the Buddhist notion of satori, in which words fail—“a kind of intractable supplement of identity, what is given as an act of grace, stripped of any importance.”

And so we look for ourselves and the death of ourselves when we look at photographs. Absence, forever present.