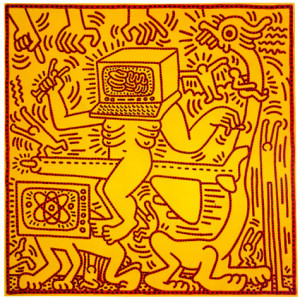 I’m increasingly disturbed by my behavior.

I have a tic, an affliction, a virus. Like many, when a moment of emptiness descends upon me, I reach for my phone, tap it madly, and hope to find stimulation. I do this in line at the grocery store, during one of my kids’ soccer games, or even at a red light.

I’m searching for the dopamine spritzer I’ve become addicted to, but I don’t think anything productive comes of my impulsive neediness. I scroll through photos, read some random updates, and then when the red light changes to green, I go on my way (if I see the light).

I’ve become the “computer man” Keith Haring presciently depicted in his art in the 80s, with a computer monitor for a head and a phone for a hand. I’ve merged with my gadget, and lost myself in the process.

I view these spaces of boredom as unwanted instead of the gifts that they are. Our minds need these little pockets of rest to create, after all. Moments of boredom resemble sleep; when the mind finds itself in an interlude of rest, synapses connect in different ways, new thoughts form.

Also, this supposed boredom is an invitation to actually pause and experience the world. Before I had a smart phone, boredom was an occasion of observation, a wonderful juncture of daydreaming. I could conjure a new story idea while standing in line for a burrito. I could observe the way a person’s face moved through thoughts while riding the bus home from work.

As the poet Mary Oliver wrote, “To see that the way the flicker flies is greatly different from the way the swallow plays in the golden air of summer.” Oliver tried to see through “the heavenly visibles to the heavenly invisibles,” something that requires absorption in those stray, lingering moments of life.

Just as we’ve forgotten how to make butter or build chairs, like our ancestors of yore, I think we’re increasingly losing the art of being bored. On family vacations as a kid, my parents drove hundreds of miles each day. I had to read a book, stare out the window, play a game with my brother and sister, or squabble—and usually all of the above. Nowadays, we stick a screen with a movie on it in a kid’s hand.

We’ve forgotten that on the other side of boredom is the most exciting experience one can have as a creator—the state of discovering new possibilities. The mind doesn’t seek boredom—it seeks stimulation, creation—so these moments of stasis are actually a breeding ground for ideas.

There are even psychological studies on the merits of boredom. Sandi Mann and Rebekah Cadman, psychology researchers at the University of Central Lancashire, found that boredom felt during passive activities heightens the “daydreaming effect” on creativity. The more passive the boredom, the more likely the daydreaming and the more creative a person is afterward.

Being bored actually signals to the mind that you’re in need of fresh ideas and spurs creative thinking.

One of my resolutions this year is to not only slap my hand every time I mindlessly reach for my smart phone, but to revere boredom for the sacred, creative moment it is. I’m going to surrender to boredom, drink it in, taste it, let its waves wash over me and … see what happens.

“Boredom is time’s invasion of your world system,” wrote Josephy Brodsky in “In Praise of Boredom”. “It puts your life into perspective, and the net result is precisely insight and humility. The former gives rise to the latter, not a bene. The more you learn about your own format, the humbler and more sympathetic you become to your fellow-beings, to this dust that swirls in the sun’s ray or that already lies motionless on your table top.”

To ponder dust motes, to ponder other worlds.