What’s the key element of any good story?

If you peruse the how-to-write section of any bookstore, you might think good stories are all about craft: plot, suspense, dialogue, etc. Sure, such things matter, just as the ability to string together a good sentence or draw arresting characters matters.

But in the end, I think the thing that matters most is an author’s ability to be vulnerable on the page—to be open, daring, unabashed, unashamed—fearlessly willing to bow to any taboo, unwilling to heed any notions of embarrassment. 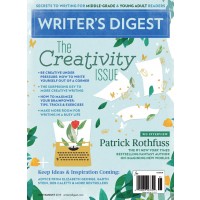 As I put it in an article that just appeared in the Writer’s Digest Creativity issue, “a good story occurs when an author travels, or even plummets, into the depths of vulnerability and genuinely opens his or her soul in the search of truths that otherwise go untold.”

I’ve been interested in pursuing a more open and vulnerable writing style since I saw Brené Brown’s TED Talk on the power of vulnerability. To be vulnerable is not weakness, Brown says—rather, it’s “our most accurate measure of courage.”

The original definition of courage comes from the Latin word cor, meaning heart. Brown says that to tell the story of who you are with your whole heart takes courage. It’s only through such vulnerability that the connections that give purpose and meaning to our lives are formed.

The urge to be a writer is a generous act at its core, after all: We want to share our story with others, to give them a world that will open doors to insights and flights of the imagination.

I unfortunately can’t share the Writer’s Digest piece because it’s only available in print at the moment, but here are some outtakes.

I had to ask myself, Why did I become a writer in the first place? I made a list. And here’s what I discovered was on it: I wanted to put words to the shadowy corners of people’s souls, to understand the desperate lunges people take to give life meaning. I wanted to explore the enigmatic paradoxes of being, how desire can conflict with belief, how yearning can lead to danger. Life is so mysterious, nuanced, ineffable—equally disturbing as it is beautiful—so I decided it was my duty as a writer to be brave enough to risk ridicule in order to bring my truths to light. Why write a sanitized version of life?

On writing improv style—saying “Yes, and …”

Do I end up writing foolish things? Blessedly, yes. In literature the archetypal Fool babbles, acts like a child, and doesn’t understand social conventions (or at least pretends not to), so the Fool isn’t held culpable for breaching any rules. As a result, the Fool can speak the truth in ways others can’t. You might say the Fool is the ultimate storyteller: He takes the conniving risks necessary to tell the tale only he can see.

“Looking foolish is good for you. It nourishes the spirit,” wrote Twyla Tharp in The Creative Habit.

On boldly declaring yourself a writer

The life of the imagination can feel trivial or even forbidden in the adult world where life’s practicalities rule. I didn’t call myself a writer for years because I thought it was pretentious to do so until I’d published. I needed a badge of validation from the external world.

But by not calling myself a writer, I realized I was not only putting up a shield, I was unwittingly diminishing myself. A secret identity weakens one and brings on the urge to hide yourself in your words. To write with verve demands asserting yourself as a creator—to yourself and to others.

The worst thing about not allowing yourself to be vulnerable on the page is that your story will never be written with the force or vigor it deserves. It won’t truly exist in the world, and you’ll feel that lack as a writer.

“I have come to believe over and over again that what is most important to me must be spoken, made verbal and shared, even at the risk of having it bruised and misunderstood,” wrote the poet Audre Lorde. “For it is not difference which immobilizes us most, but silence.”

“A work of art is a confession,” as Albert Camus said. Camus didn’t mean a personal confession, but a revelation of the raw truth of the soul. Everything I write must now measure up to such a standard.