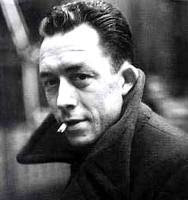 A friend of mine once told me that she read Camus because he made her happy.

I loved that statement because it’s not the obvious answer for reading a thinker known for plumbing the darkest of the dark states of human existence.

But reading Camus makes me happy as well—or if not happy, then reassured somehow—simply because he writes with such dead-on truth, unflinching and straightforward, without pretense or unnecessary contrivance, without aggrandizement yet with dramatic flair, nuance, and poetry—traits that many other writers from the existentialist all-star team don’t possess to such a degree.

For example, much of Sartre’s writing is fueled by a preening display of intellectual bravado, a showing off of labyrinthine reasoning made more obtuse by his predilection to write on amphetamines (some say Sartre started the tradition of philosophical obfuscation that culminated in the often impenetrable prose of postmodernists like Derrida).

Kierkegaard, despite the trembling depths of his passionate opposition to all conventions of group think, is still quite beholden to his God. And Nietzsche is wonderful in his “will to power,” “God is dead” way, but presents more of a call to arms than the life-long probing of truth and daily life that Camus offers.

When I was 16, my brother came home from college and gave me The Stranger for a Christmas present. In retrospect, it might have been one of the best Christmas presents I’ve ever received. I remember how exotic and confrontational the very title of the novel was. It immediately made me a bit of a stranger as a result.

As he put it, “An intellectual is someone whose mind watches itself.” That’s a brilliant definition—akin to Fitzgerald’s famous quote, “The test of a first-rate intelligence is the ability to hold two opposing ideas in mind at the same time and still retain the ability to function.”

The mere fact of watching ourselves think is a step into estrangement even as it is a step toward something like deliverance because estrangement is a necessary way to make meaning. Life is an attempt to reconcile contradictions, per Fitzgerald’s take, despite the knowledge that the contradictions might be irreconcilable.

You might say that’s the joy, although some have said that’s the damnation as well. It’s all in the execution.

“He who despairs of the human condition is a coward, but he who has hope for it is a fool,” Camus wrote.

So we’re caught in a tangled skein of cowardice and foolishness. There’s no way out. Even the very premise of our existence comes with an oppositional force, a question. As he says in The Myth of Sisyphus, “There is but one truly serious philosophical problem and that is suicide.”

Our very birth calls for a reckoning with our existence—not only how to exist, but whether to exist. We breathe the air of contradiction.

I recently read The Fall, which brought all of the above thoughts into dramatic relief. The novel is written in a manner that I rarely encounter today: a series of dramatic monologues, or confessions, by Jean-Baptiste Clamence, a “judge-penitent”—perhaps the crucial phrase of the novel.

It’s interesting to me that I can’t think of a contemporary novel that uses confession as a narrative device in such an acute manner—it’s a technique that seems to have gone out of style. I wonder if it’s because we live in an age where we’re covering up the truth or manipulating it rather than confronting it—that is, writers are more skilled in the craft of writing narratives, whether it’s the contrivances of plot or the fulsome lyricism of detail, but less skilled in writing something so basic and straightforward as an exploration of truth.

The art of publishing has trumped the art of writing.

One could make the argument that memoirs function as confessions, but I don’t think that’s necessarily true. Although we’re certainly living in an age dominated by memoir, contemporary memoirs function more as tell-all stories—confrontational only in the sense of revealing shocking behavior (which isn’t even truly shocking anymore since shock has been exhausted), but not confrontational in the manner of a simple confession of the truth of one’s soul.

The confession at the heart of The Fall is what makes it still compelling 54 years after it was published (it was Camus’s last novel before he died in a car crash).

For one, the confession in The Fall implicates the reader. In fact, in addressing an undescribed listener, the reader acts as the “confessor.”

“A guilty conscience needs to confess. A work of art is a confession,” Camus wrote.

All of Camus’s work operates as a confession, which is why his writing feels so much more honest than others to me. His guilt spawns his knowledge, his language.

However, in The Fall Clamence hasn’t done anything particularly bad. He’s a good man—or a man as good as most and better than many—but who because of his scrutiny, the power of his introspection, is stripped of action. The novel shows the self-damnation of thought in that we can’t escape our consciousness if we truly think about our actions. It’s a cautionary tale because Camus was above all a man of action—to read The Rebel is to be incited into action, in fact.

Clamence’s fall—evoking Adam’s fall—is that of knowledge, but a different kind of knowledge than Adam possessed from the simple disobedience of biting an apple. It is the knowledge of the fundamental nature of irreconcilable contradictions.

The story takes place in Amsterdam (below sea-level for a man who “never felt comfortable except in lofty places,” preferring buses to subways, open carriages to taxis, terraces to closed-in places, etc.) and in the red-light district, which used to be the Jewish quarter before World War II (“until our Hitlerian brethren spaced it out a bit. … I am living on the site of one of the greatest crimes in history”). Clamence has fled from lofty Paris to search out a place to resemble the situation of his soul.

Yes, he’s a dramatic one.

He has good manners, fine speech, and is well educated, “but frequents sailor bars.” It’s in such places that he can better recognize himself—a contrast to the more lofty places where he’s lived in mastery of life, a defense lawyer who admirably defends the poor, yet indulges in the advantages that his charm and station in life afford him, especially in matters of love.

He suffers three crucial moments of recognition in the novel: once as he strolls past a bridge and hears a splash in the Seine, but doesn’t deign to inconvenience himself to jump in and see if someone tried to commit suicide; later as he passes another bridge at night and hears laughter, which he momentarily thinks is directed at him as judgment; and finally in a moment of minor road rage where he almost resorts to violence.

In these three easily forgettable moments, Clamence realizes he’s not the pure do-gooder he thinks himself to be, and it’s the recognition of his hypocrisy that causes his fall. If only everyone in the world were such a hypocrite! After all, he’s nothing more than a classic limousine liberal. I can walk down to the North Berkeley Peet’s and yank out many more damnable sorts, myself included.

It’s the acute and crippling self-analysis that makes the novel, though—we should all grapple with the nature of our contradictions in such a manner. And this is what makes me happy and reassures me when I read Camus—the answers to our problems, whether political or personal, don’t lie in clear, intractable solutions (hint, hint Sartre, with your communist panegyrics), but in a continual confession, an exploration of the inherent and inescapable contradictions we find ourselves in.

We are all judges, after all, laying down a truth, expectations, and laws of behaviors for ourselves and others. Yet we are also all doomed to a sort of original sin different from Adam’s—we don’t fall from God’s law, but our own. We can’t not be hypocrites. We live inside of a double negative.

Most of us are unable to jump in the river to save the one who might have committed suicide because the water is too cold, or save those who are hungry and poor in the world—we like our lattes too much, our designer jeans, our international trips, our ability to gather in cozy places and discuss the problems of the world with other like-minded, smart (hypocritical) people.

We’re creatures of temptation, imperfection, and a certain kind of damnation. Deliverance doesn’t come through correction, but an immersement and recognition of the inherent contradictions that make us human. This type of penitence is the only thing that balances and adds a soft nuance to the harshness of judgment (hint, hint righteous Tea Partiers, righteous anybody).

So stand up and say you’re a judge-penitent for God’s sake.

We’ll all be the happier for it. It’s one path to a life of acceptance after all, no matter how troubled that acceptance might be.