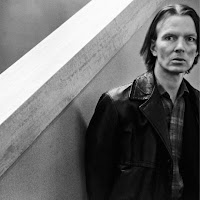 A junkie’s world is inherently riven. The paradise of a high, akin to being in the Garden of Eden, cracks into the schism of banishment, a reeling back to the real world, where one’s fancy suddenly finds little or no reciprocation, little or no tenderness.

I’ve been thinking about this because I’ve been mulling over one of my favorite poems by Jim Carroll, a noted junkie poet. Junkie writers are perhaps best suited to capture the terrifying disjointedness of the world simply because of their own extreme rises and falls, and many, like Carroll, write with a mystical yearning that imbues their vision with sacredness.

Carroll’s poem, an untitled poem that is printed below, can easily be read as nothing more than a tender day’s drift through a lover’s thoughts as he travels through New York City separated from his love. But I think it’s much more than that. The poem hinges on subtle paradox, resides in the complications of absence—and most importantly, attempts grace.

Grace is the key word here. Carroll quests to solve the irreconcilable, the state that defines us in our severance from God, love, or junk (pick your savior), by wending his way—if only momentarily—toward reconciliation. Could reconciliation, no matter its form, be the definition of grace?

The poem follows a meandering, dreamy rhythm. Carroll’s lover goes “west on 8th St.” to “buy something mystical to wear,” and he says he will “simply tuck my hands into my corduroy pockets / and whistle over to Carter’s for the poster he promised me.”

Except simply is misleading, a guise. The lovers survive “like a wet street in August,” imperiled as they move apart because love so easily evaporates with time and distance. The bus he travels on is “terrified by easter”—a lower case Easter, marking a different kind of holiness, a secular sort of rebirth that might be the rebirth of their own love.

Why is rebirth feared, though? As any lover who has lost love knows, the rebirth of love is terrifying—no matter how one might yearn for it—if only because rebirth won’t bring back the Garden of Eden that existed in that initial, wondrous love. In rebirth, a new creature is born, one that holds the strange coexistence of two worlds in troubling paradoxes.

Just as a junkie’s most blissful high always ends, in the dark aftermath of departed love a lover seems to have only two choices: find a way to accept the rather flat state of the world, or get high—find another love. Neither option seems particularly good, though, if your first love possesses what seems like the holy. In this poem, Carroll tries to preserve the holy because it’s the only way he can maintain a state of grace—to nurture the whole of love even when half of it is gone.

“All the while my mind’s leaning on you,” he says as he rhapsodizes about leaning on her below “some statue in Central Park / in the lion house at the Bronx Zoo on a bed in Forest Hills.” The day is “confetti like,” celebratory, but the scraps of paper easily blown about by the wind point to his lover’s absence, or rather, a presence that is dissipating, scattered. “Movie schedules” sustain his isolation; he exists more and more in a world of dreams.

When he finally sees her, he sees her “in the wind of Astor Place reading.” She’s a creature of breezes now, gone. The poem is his effort to keep the goodness of her close, though, to find a way to reconcile this horrible absence.

Junkies live in the moment, and the only planning comes from looking for the next score. In similar fashion, Carroll embraces the fondness of memory, the warmth of a love, as a similar drug. To accomplish this, though, he must think of his love thinking of him, no matter how unlikely that might be, just as the world doesn’t reciprocate a junkie’s high. She’s probably more preoccupied by the “mystical dress” she’s buying, her own life in the city, the separate bus she’s on.

Carroll, raised a Catholic and never able to truly shed his religion, writes with a sense of glory toward something not present. Atheists often find different ways to pray to a lost God. Carroll has been banished from a Garden of Eden, but he travels with the beauty of the memory of it. A different kind of grace, one that God can’t grant, one that drugs can’t grant. Yet in this beautiful leaning toward his absent love, Carroll defines grace simply because he keeps giving to one who’s gone.

Grace, in the end, can’t be granted, not even by a God. We have to create our own grace.

We are very much a part of the boredom
of early Spring of planning the days shopping
of riding down Fifth on a bus terrified by easter.

but here we are anyway, surviving like a wet street in August
and keeping our eye on each other as we “do it,” well
you do west on 8th St. and buy something mystical to wear
and I’ll simply tuck my hands into my corduroy pockets
and whistle over to Carter’s for the poster he promised me.

I like the idea of leaving you for a while
knowing I’ll see you again while boring books
W.H. Auden, and movie schedules sustain my isolation
and all the while my mind’s leaning on you like my body
would like to lean on you below some statue in Central Park
in the lion house at the Bronx Zoo on a bed in Forest Hills on a
bus.

I reach 3rd avenue, its blue traffic, I knew I would sooner
or later and there you are in the wind of Astor Place reading
a book and breathing in the air every few seconds
you’re so consistent.

Isn’t the day so confetti-like? pieces of warm flesh tickling
my face on St. Mark’s Place and my heart pounding like a negro
youth
while depth is approaching everywhere in the sky and in your
touch.